Marshall Aerospace and Defence Group has been presented with Queen’s Award for Enterprise in the International Trade category by Sir Hugh Duberly, Lord-Lieutenant of Cambridgeshire. The award recognises how, during the course of three consecutive financial years, Marshall saw an increase of almost 70% in its international trade.

During this three-year period, more than half of Marshall’s exports were engineering and support services to airframe OEMs, governments, Air Forces and commercial operators. Of particular note, in 2014, Marshall completed a complex, time-sensitive two-aircraft cabin upgrade programme for TAP, Portugal’s leading airline. Also contributing to international sales was, and continues to be, the manufacture of fuel tanks for the Boeing P-8 maritime patrol aircraft, for which the OEM presented Marshall with a ‘Supplier of the Year’ award in 2014. 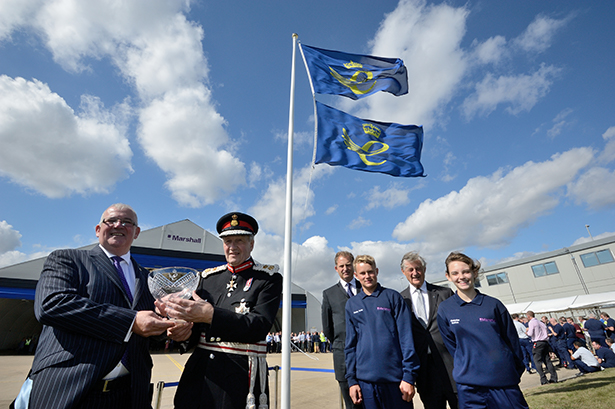 Kimberlee Gretton and Stanley Carter, first year Apprentices at Marshall raised the flag and Keira Liddington, a third year Apprentice at Marshall is also the Lord-Lieutenants Cadet this year and helped during the celebratory event for staff at Cambridge Airport.

Steve Fitz-Gerald, CEO of Marshall Aerospace and Defence Group, comments: “It is a great honour to have won a Queen’s Award for Enterprise, for which we are most grateful. It is the most respected of all business awards, and to be recognised for our role in the export of the UK’s engineering capabilities, in both commercial and military sectors, is an immense boost to the men and women of our company. Marshall has built an enviable reputation the world over, and we are keen to do our part to strengthen the UK's Prosperity Agenda”. 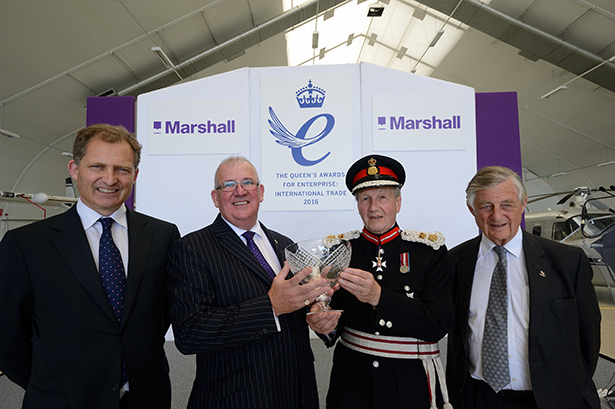 Marshall’s strength in the international market place has a significant impact at home. The company, which employs more than 2,000 people, adds circa £100m gross value-added to the UK economy and spends over £140m in the supply chain to support its business; indirectly supporting a further 2,500 jobs (Buro Happold, 2014).

Fitz-Gerald concludes: “Everyone in the business is incredibly proud of this wonderful achievement, coming as it does just a few years after we won a Queen’s Award for Enterprise in Innovation. Also, 2016 marks our 50th year of supporting the UK’s Royal Air Force’s C-130 fleet, time during which we have performed invaluable maintenance work, undertaken emergency recovery projects and made numerous upgrades – work that has been recognised around the world and led to us supporting the C-130 fleets of nine other air forces around the world.”