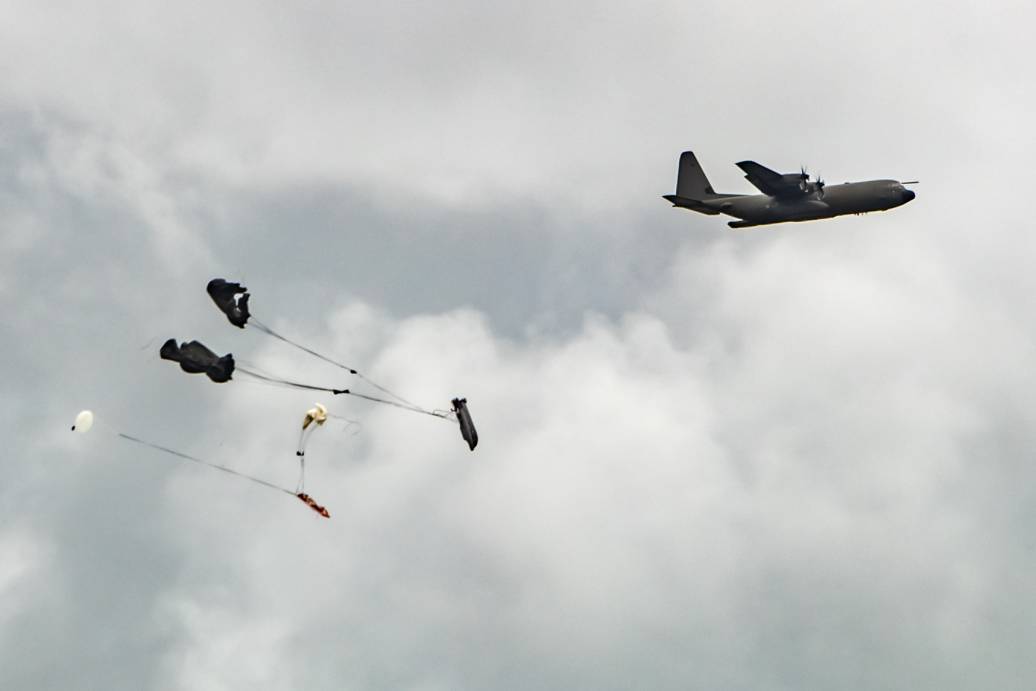 Chief Avionics Engineer, Philip Aldred, is well aware of what the C-130J Hercules is designed to do, and is often one of the engineers making sure it’s ready to be called upon to do it.

However, he’s not often up close and personal with the aircraft, and certainly doesn’t ever get the chance to see it in action, going about its tasks in the unique way that the C-130 has done in so many crucial missions over the years.

He especially didn’t think he’d see it in action while he was walking along the beach, enjoying a holiday with his wife and dog at the end of last summer.

“I was on Studland Bay Beach, in Dorset, when I heard a familiar sound and looked up to see a C-130J coming into view.

“I watched it fly a little way out over the sea, where it opened the cargo door and ramp, and dropped a couple of boats.

“They hovered down on parachutes, to the surface of the water, where they were then rapidly joined by some other high speed boats that seemed to come from nowhere.

“It would have been a training mission for its special operations work, as boat-dropping is a key capability and one that has been called upon in a number of scenarios.”

“I’m sure it will have been a flown by flight crews from RAF 47 Squadron out of Brize Norton and prepared, loaded and deployed by crews from 47 Air Despatch Squadron of the Royal Logistics Corps (47 AD Sqn RLC).

“They use Studland Bay for training of boat drops, or boat airdrops, all the time, but I was still pretty lucky to see it! This sort of training flight is for the pilot, loadmaster and air despatchers to practice their skills.

“Typically there aren’t any troops on board for a training drop like this, and I didn’t see any guys jumping out the aircraft. When they do take part they don’t sit in the boat, but jump separately and the boat is generally full of equipment.

“For this training drop there were people in boats in the drop zone area to shoo away any other boats in case they get a PURIBAD dropped on them, so they act like drop zone safety boats.

“Even though I work on this aircraft and know it intimately, I’ve never even seen the cargo bay with a RIB or other small boat mounted on its special platform.

“It was fascinating to see the drogue parachute being deployed and pulling the load out over the aircraft's rear ramp.

“I’m really glad I got the chance to watch the descent and see the boat separate from the platform and both descend under their own parachutes.

“I love working on this aircraft and know how dependable it is and how it has proved its capability in the field time and time again, but seeing it in action that day was something of a highlight for me.”