Export provides a world of possibilities 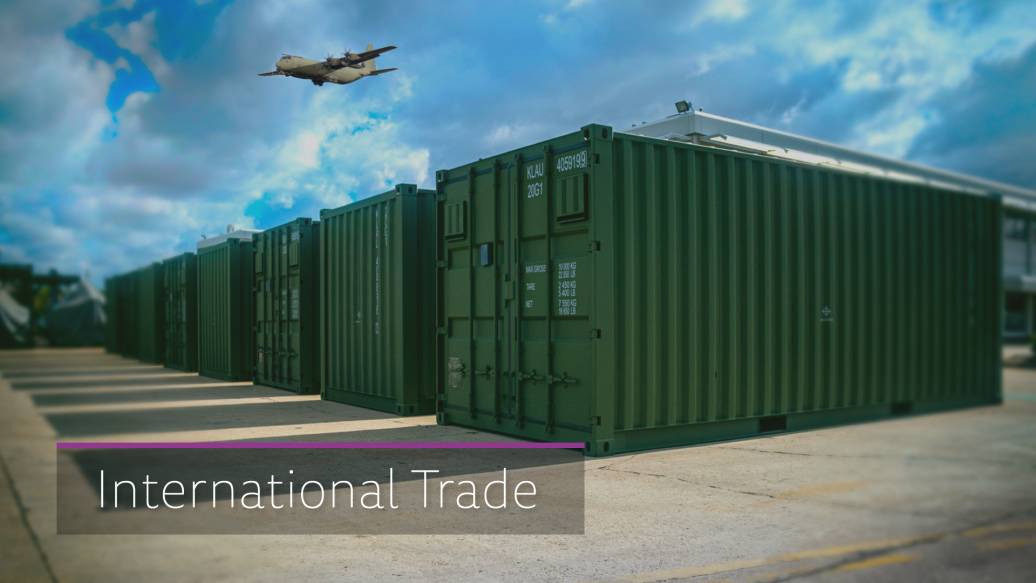 International trade is more than just about exchanging or exporting goods and services overseas. It serves a wider function, such as also forging relationships, putting the UK on the map and supporting home-based industry and jobs and ploughing funds back into the UK economy.

We see our international markets as a natural extension of our UK business. We ensure the continued air worthiness, relevance and interoperability of a valued proven asset, the C-130 aircraft that many international air forces will continue to rely on in the coming decades.

We also provide land-based infrastructure, such as container systems, which support the ground forces of many global governments.

Our matrix containers are designed to be easily adapted for a number of functions, so as well as warehousing, office and command and control functions, they also provide medical facilities and even air traffic control towers.

Our long-standing partnership with the UK RAF has undoubtedly helped us win contracts to work on the C-130s of a number of international allies’ Air Forces.

We currently support some 17 international operators. Since 1970 this has included the Armed Forces of governments across all continents of the world, the majority of which we continue to support today.

We are also active participants in the Aerospace Growth Partnership, a strategic partnership between the UK Government, industry and other key stakeholders, established to secure the future of the UK aerospace industry in the face of an ever changing, and increasingly competitive global landscape.

This partnership is intended as a vehicle to tackle barriers to growth, boost competitiveness and exports and grow the number of high value jobs in the UK.

Despite the challenges presented by the global pandemic we continued to support all our customers.

During lockdown we dispatched a number of our containers in two major contracts - with the Netherlands and Denmark.

We’ve dispatched nearly 300 to the Netherlands as part of our multi-million-pound DVOW contract awarded by the Dutch Defence Materiel Organisation (DMO) at the end of 2018.

The units are part of the major Dutch Defensiebrede Vervanging Operationele Wielvoertuigen programme, or DVOW, to update the Dutch Armed Forces with new vehicles, containers and support equipment.

Initial construction and delivery was for warehouse units that were used to train operators in handling the containerised systems and to fulfil a training commitment for their vehicles.

We’ve designed our matrix system to enable us to gradually increase the complexity of the containers, as the programme for more than 1,500 containers progresses, and so far we’ve dispatched two major variants.

We’ve also recently dispatched the first deployable containers to the Danish Armed Forces as part of our multi-million pound contract with the Danish Defence Acquisition and Logistics Organisation (DALO), which was also signed in 2018.

The first variant is an office unit, equipped with facilities for Chemical, Biological, Radiological and Nuclear (CBRN) environments.

These have a newly-developed air conditioning unit that provides working conditions for climatic conditions between the extremes of -51° to + 63°.

These crucial export contracts, which amount to 42% of our total turnover, enable us to make a significant contribution to UK GDP.